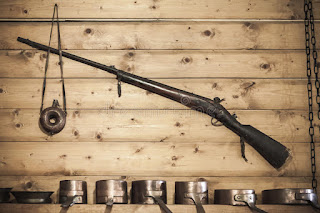 *The opinions and views articulated in these opinion pieces may not necessarily reflect the opinions or views of gunsgold.com and its entire staff.*

Let me be very clear; a firearm is a tool.

Like any tool, the ultimate use of this widget depends entirely on the hopes, dreams, and ability of its end user.

A hammer, for example, can be used in multiple ways. One can create; homes, wood working projects, shelving and flooring, repairs etc. With the skilled use of this tool.

One can also destroy with a hammer. All of the above that can be created, can be undone with the tool. Demolition often cannot be done without a large enough sledge hammer, swung with enough heft and skill to knock out walls. A sledge hammer is a tool some of us are simply not physically capable of using properly, but some, either through determination, sacrifice, or necessity (or a combination of all) learn to wield the sledge in a way that results in progress through destruction.

A firearm, is one in the same. It can be used to create. In the case of the United States, firearms helped to create a country built from rebellion. American forefathers saw necessary the motives to shake off unnecessary governmental tyranny, in which doing so, created the greatest movement for personal freedom and liberty that human history has ever recorded.

One could perhaps argue that the words that you read right now; on a device using the internet, on a "blog" reading in English...all of these things would never be possible, if not for the one time roar of a gun and the implications that followed.

The firearm can also destroy. Too much attention, I think, is wasted on this obvious facet. Like focusing specifically on demolition with a hammer, or how you can hurt your thumbs if swung improperly, there are those that desires that you focus on how a firearm is a tool of destruction and mayhem only. We know that is not how tools work. The tool is an extension of its user.

The constant psychological assault on the notion of what firearms are, and what they are designed to do is appalling. We see this in main stream media, especially with the left leaning outlets. There is a near constant chorus to outlaw "assault weapons" after shootings occur or to put new laws on the books to stop "Gun violence". The terms are purposely made to vaguely make you think its a problem with guns...and not violent people.

Let us not forget that hammers can be used to kill. Even spoons. I mean even a hamburger if used frequently enough will usher you to a quick demise.

Violent people, and criminals find a way to carry out evil. When we ascribe malice to objects, we are either purposely misleading, or epic in our naivety. There is a concerted effort to make you as easy to control and as dumb as possible. The antidote to this, is to think freely.

Steele yourself from this ignorance. Know that tools are an extension of people. Guns don't kill people, people kill people and they do it with shocking ingenuity and have for thousands of years.

If you think laws stop criminals, or that an FBI or ATF ruling stops a determined psychopath, perhaps you need to enlighten yourself on what happens in country's with strict gun laws. Look at Japan, or European nations with their knife attacks.

Violence has not ended in those places and you would do well to understand evil does not read the bylaws before it conducts itself.

Imagine a mind so simple that it thinks a certain area, an area filled with defenseless individuals, like a school or a hospital can simply be designated a "gun free zone" and thus, it is so. Like criminals are repelled by the sign like a dog to an ultrasonic fence. The levels of blissful ignorance are at a level that requires a concerted effort to acknowledge and understand.

Let me try to summarize and wrap this up: Bad people will always be bad. They will use tools to be bad but the tool is not inherently bad. The bad person is. There you go, clear as mud.

If you made it this far, you're smart enough to change the world. Do it one thoughtful conversation at a time. Don't be pressured to shake what you believe in, and never forget that the most lethal weapon you will ever be permitted to own is a free thinking mind. Before long, there will be regulations on these as well if we do not find the hill we are willing to defend.

Be good folks, take time to think. Also, tell somebody that you love how much they mean to you. No day is promised to us. Be thankful and appreciative today, because there's many who would use their last wish to have what you have.