How Long Before They Are Gone? 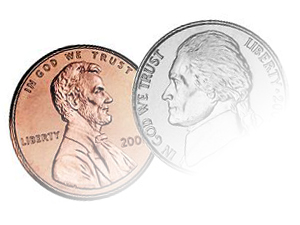 Mises.org
Back in December 2006, the US Mint, in yet another power grab over economic life, made it illegal to melt pennies and nickels in addition to exporting large quantities of either.

Though the Mint admitted there was no evidence coin melting was occurring, this was the government's attempt at being proactive to prevent the destruction of its legally imposed currency.
So why the concern over people melting down coinage that supposedly belongs to them?
Back when the ban was implemented, the high price of copper was responsible for driving up the price of individual nickels and pennies in terms of metal content.

Due to their copper content (nickels minted between 1946 and 2011 are composed of 75 percent copper and pennies minted between 1909 and 1982 are composed of 95 percent copper), both coins have a higher value as metal than as legal tender.
The irony in the government banning the melting of its own issued currency lies in the fact that its own actions contribute to the higher price of copper. Whenever the Federal Reserve engages in dollar easing (read: money printing), this newly printed "wealth" often translates into higher stock and commodity prices.

Even the very announcement of increased monetary intervention by Fed officials, including Chairman Ben Bernanke, tends to boost market confidence as stocks rally almost immediately. Recently, commodities and stocks soared when the Fed lowered the interest rate it charges for foreign central banks to utilize its dollar swap lines without explicitly mentioning its intention to sterilize such transactions to prevent an increase in its balance sheet.
Basically, the Fed once again told the world that it opened up the dollar floodgates just a bit more to offset a crisis in Europe.
Along with its intention to hold short-term interest rates near zero until "mid 2013," Bernanke and company are standing by ready to keep borrowing costs suppressed by entering into the market to purchase treasuries. Presently the M2 money supply has been growing at a 15 percent annual rate for the past 6 months:

(Chart via FRED)
So what does all this mean for nickels and pennies minted prior to 1983?
Gresham's law, named after Sir Thomas Gresham, who was a financial agent of the English Crown in the 16th century, states that overvalued money drives undervalued money out of circulation: "bad money drives out good" for short. More accurately, the law should state something along the lines of "government-enforced parities that alter the market value of money have the effect that overvalued money drives out undervalued money." Because in a free market those products and goods that are of higher value stick around longer than low-quality products, Gresham's law only applies when government monetary intervention is present.
To help understand the effect of Gresham's law, Jörg Guido Hülsmann provides a simple thought construct in The Ethics of Money Production:

Suppose for example that both gold and silver are legal tender in Prussia, at a fiat exchange rate of 1/20. Suppose further that the market rate is 1/15. This means that people who owe 20 ounces of silver may discharge their obligation by paying only 1 ounce of gold, even though they thereby pay 33 percent less than they would have had to pay on the free market. Prussians will therefore stop making any further contracts that stipulate silver payments to protect themselves from the possibility of being paid in gold; rather they will begin to stipulate gold payments right away in all further contracts. And another mechanism operates to the same effect. People will sell their silver to the residents of other countries, say England, where the Prussian fiat exchange rate is not enforced and where they can therefore get more gold for their silver. The bottom-line is that silver vanishes from circulation in Prussia; and only gold continues to be used in domestic payments. The overvalued money (here: gold) drives the undervalued money (here: silver) out of the market.

Anyone looking to make a small investment might think twice about throwing nickels or pre-1983 pennies into a jar with the rest of their accumulated change.So with nickels worth slightly more than 5¢ and pennies minted before 1982 worth almost 3¢ due to their copper content, it isn't hard to imagine that they will someday disappear from circulation as the Fed continues to expand its monetary base. Kyle Bass, who heads the hedge fund Hayman Capital Management, has already purchased $1 million worth of nickels according to Business Insider.

For any more proof that the 5¢ and certain 1¢ pieces may disappear soon, just consider how many Roosevelt dimes or Washington quarters minted pre-1965 you see around today. Both are composed of 90 percent silver and are worth far more for their metal content than they are as legal tender.

February 07, 2012
Very cool part time project for those with a little extra time on their hands.   Take an ordinary shipping container & turn it into something that could very well save you & your loved ones  life's in an extreme emergency. While you are here, check out  Atlas Survival Shelters.com for more good ideas.
Read more