The Government Can't Help You, And Other Lessons From The Walking Dead 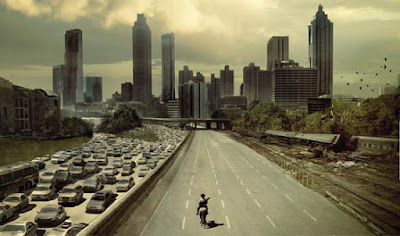 If you look closely into the herd of zombies stumbling through a school parking lot in next week’s episode of The Walking Dead, you’ll see one wearing a FEMA jacket – a mordant, apparently trivial detail that actually reveals one of the series’ major truths: The Government Can’t Help You.
AMC’s gripping and often gross zombie apocalypse series returns tonight for its second season, with its ragtag band of survivors led by Sherriff Rick Grimes. He has improbably held onto his hat and badge though it all, as any self-respecting sheriff in a modern-day Western would. As the group tries to outwit the flesh-eating living dead, here’s what to expect and a few things we’ve learned.
1. THE GOVERNMENT IS USELESS
At the end of last season, the group had finally made it to the Centers for Disease Control in Atlanta, only to find that everyone had fled or died except for one possibly mad scientist left to turn out the lights and wait for the huge fireball explosion that blew the place up. Tonight’s new season picks up two days later, as the group heads for Fort Benning – will they never learn?
2. RICK IS EXACTLY THE GUY YOU WANT IN A CRISIS . . .
Steadfast, ready to leap in front of a zombie to save a child, he takes his roles as lawman and family man seriously, and Andrew Lincoln brings real humanity to a guy who might have been as dull as that upright responsibility makes him sound. Playing this All-American hero, Lincoln is far from his theatrical roots at the Royal Academy of Dramatic Arts, or his best known movie role as the friend hopelessly in love with Keira Knightley in Love Actually, but this unlikely bit of casting holds the series together. Although you have to wonder what he was thinking when he shot tonight’s scene in which he carefully inspects some zombie guts.
3. BUT HIS WIFE IS A DRIP
Sorry, I know Lori is a good mother, and we’re meant to admire her, but Sarah Wayne Callies’ limited performance makes her look like an emotional zombie. And it’s not as if she doesn’t have a wacky love life to work with. In season 1, when Lori thought her husband was dead, she began an affair with his former partner, Shane (Jon Bernthal), so when Rick caught up with his family she discovered she had accidentally cheated on him. (Don’t you hate when that happens?)  Now there are major hints everywhere (even in AMC’s publicity) that Lori is pregnant, and I’m not looking forward to that Who’s the Daddy Drama.  Really, zombies are quite enough. And speaking of them ...
4. ZOMBIES ARE IDIOTS
Vampires are charming rogues, but as we learned in the CDC episode, zombies barely have enough brain function to walk. They never talk. That’s why they are never the stars of their own movies and TV shows, like those seductive heroes on True Blood – no personality. Throw a flare to distract them and they lumber away. They are tenacious, though, so good luck with that escape.
Even though zombies are merely the excuse for the survivalist story, AMC is working to give them some character. A new series of webisodes examines the before-she-was-zombified story of Hannah, the woman from season one known as Bicycle Girl because Rick found her under a bike before he compassionately shot her. Take a look at her in better days in the first webisode (the rest are available at amctv.com)


Remember what I said about shotguns ?