February 15, 2011
I don't have to tell you that things are bad.
You know that things are bad. Unemployment is rampant.
The cost of food and energy is skyrocketing.
A police state is encroaching across the land.
People across the globe are rioting.
Wars are never ending.
Hunger and starvation are realities for far too many people.
Too many houses are in foreclosure.
Too many families are living in tents or worse.
Currencies worldwide are collapsing.
Everything seems to be falling apart and there doesn't seem much anyone can do about it.
It seems the best we can do is to keep on keeping on.
Why is this happening?
That's a valid question.
People have their own opinion on who to blame, but what's at the heart of the matter?
I think it's fear. I think we have allowed these things to happen because of fallacious fears that have been forced upon us by those who wish to control the mass of humanity. 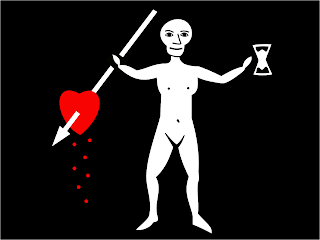 We have all been lied to. We have all been deceived.
We are lied to by politicians who claim to be looking after our best interests.
We are deceived by corporations who claim to be providing us with safe, state of the art products.
We are lied to by the establishment scientific community who claim to be providing us with facts to help sustain our future.
We are lied to by the medical establishment (especially mega pharmaceutical corporations) who claim to cherish the health of their patients above the desire to profit.
We are deceived by the corporate media who claim to be open, honest and objective.
We are deceived by the central banking cartel who claim to wish to provide us with economic stability and full employment.
In short, we are lied to and deceived by any entity or organization who believe that by doing so they will be able to fleece money and gain power from the common folk.
We have allowed this to happen because of fear.
We are afraid of terrorists lurking around every corner and planning on blowing up airplanes, trains, malls, government buildings, our homes, kidnapping our children or any number of nefarious things. We are afraid that our neighbors who own guns will suddenly become raving lunatics who will hunt down the nearest congress critter.
We are afraid that Islamic fundamentalists will suddenly take over our governments and force us to obey sharia law.
We are afraid of what will happen should currencies collapse.
We are afraid of having to face life without a societal "safety net." We are afraid of everyone and everything we are told to be afraid of by those who pull our strings.

It seems to me that the vast majority of us are afraid of the truth.
The truth will set us free, so maybe we're afraid of freedom.
We are afraid of having to look after ourselves, of having to make our own way in the world, of having to live independent without mommy government there to hold our hands.
We demand security without being willing to do the hard work of securing our own selves.
We demand protection while forgetting how to protect or most precious principles.
What good is surviving as a society when the principles we hold dear do not survive with us?
We live in fear, cowering from shadowy enemies, sniveling before the masters, obeying their every command no matter how humiliating, hoping that they'll be done with us quickly and leave us alone to crawl back to our sheltered lives.
But they won't leave us alone, they just get more intrusive.
We bleat and grumble and moan about the circumstances but find it so difficult to just simply disobey, to simply refuse to go along with their plans, following the flock on the path to who knows where. 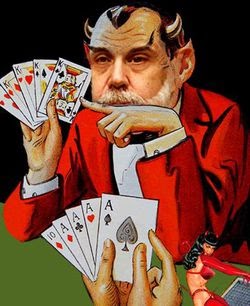 We know something's wrong.
We can feel it in our guts.
There's a creeping malaise out there, sending feelers into every aspect of society.
This is the fear.
This is the unease in the back of your mind as you go on with your everyday life.
You may think to yourself, as I have, that nothing bad can happen to you.
You've been a good person all your life.
You've worked hard.
You've played by the rules.
Yet this feeling in the pit of your stomach grows.
The uncertainty metastasizes.
You find yourself worrying about what the future will bring.
You may realize that maybe you're not so invulnerable after all.
This has happened, in my opinion, by design.
The fractional reserve system that is in place in the modern world is one designed to funnel wealth to a very few privileged and extremely wealthy elite masters.
They are stealing the wealth the common folk create.
They offer no tangible production for the betterment of humankind.
It seems obvious to me when they are already the super wealthy and yet they can take hundreds of billions or even trillions in so called bailouts that our progeny will be paying back for generations. Those at the top have designed the system.
They control all aspects of it.
They can manipulate it as they want.
When they see that people have figured it out and are starting to advance and compete, they change the rules.
They create the fear, threatening even our very congress with martial law, and then they feed off it like parasites.

It doesn't have to be that way.
We can refuse to go along with their system.
We can insist on auditing their system, discovering the fraud and slowly dismantling their monopoly to allow competition to bring in a more fair system where the common folk actually have a say in where their money goes.
We need to stop being afraid to look at reality.
We need to admit to ourselves that we've been played and stop being afraid of what they will do when we point out their crimes.
We can stop living in the fear they create and start creating a positive future based on love, respect and faith in humanity. 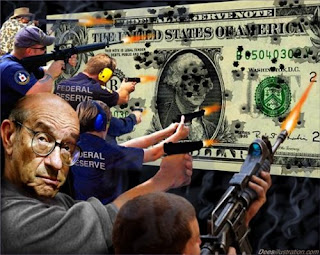 We need to remember that we are the economy, you and I and the rest of the common folk.
We are the ones who create real wealth, not those who print portraits of dead presidents, despots and tyrants on pretty paper.
We can set up alternative systems like the precious metal systems that are springing up organically across the land as opposed to the fractional reserve system that is intrinsically fraudulent.
Copper, silver, gold, palladium, platinum, etc. have intrinsic value.
They cannot be created from thin air.
It takes labor to mine and process metals, so they are a measure of the value of labor rather than a promise for payment and a measure of indebtedness.
This is the type of system needed to keep the greedy from going overboard.
This is the type of system that would keep those in check who would create the pyramid type scam we see today.

Things are bad and they are likely going to get worse.
But that doesn't mean you should just duck your head and go along to get along.
You can no longer afford to ignore the problem.
You can no longer to remain apathetic.
You need to get involved, to add your voice to the growing chorus demanding freedom.
You need to add your voice to the growing masses who understand who the real puppet masters are and wish to see them no longer in charge.
You need to stop being afraid to speak up and let those at the top know that you will no longer live as a slave to their system.
They want you to live in fear, but they are likely quite afraid of you, for we outnumber them thousands to one.
They know that if enough of us realize this fact and reclaim the power we have, that they will have to relent to our demands.
One can only hope this can be done in a peaceful and constructive manner.

CIA May Have Used Smartmatic To Install Biden ..

How to Remove A Popular President- Assassination via Election fraud. The ball of yarn is starting to unravel ..       The Sham Election is About to be Overturned .. & is Smartmatic working with the Central Intelligence Agency to subvert the election process?..
Read more