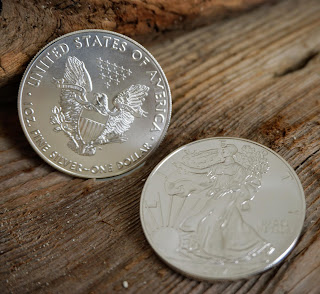 Despite the best efforts by the American mainstream financial media, the eager PR division of the United States Dollar Ponzi Scheme, to paint the rosiest of rosy pictures for blindly optimistic readers, the stubborn image of a debt-swollen jobless behemoth economy slowly toppling persists. No matter how much U.S. departmental data is primped, polished, and primed, no amount of lipstick is going to transform this fat pig into a princess.

This week’s top harbinger headline points to the fact that the United States is once again bumping its fat head on the ceiling of its spectacularly stratospheric debt ceiling of $14.3 TRILLION dollars. That means an act of congress is once again necessary to lift that limit. The alternative is either a) a revaluation of the U.S. Dollar to reflect the depreciation inherent in Quantitative Sleazing as part of a debt restructuring, or b) default.

Default? Could it be?

Never, according to bright-eyed Harvard educated economists and Forexperts.

“The likelihood of a restructuring of US sovereign debt is zero,” says MF global currency and fixed income analyst Jessica Hoversen. “As for a downgrade, while it’s theoretically possible, it is still extraordinarily unlikely.”

The U.S. is Smoking Crack
The rate at which U.S. debt is growing is well beyond what it could repay, even if the economy were to start growing at 10% per year. That’s because the rate of U.S. debt growth in the last 3 years is well over that figure, and since 2002, the debt has more than doubled.

This is the mathematical certainty that is assiduously kept out the press by accommodating editorial boards.

Lets try to sift through the contradictory headlines and see if we can’t discern something a little more reminiscent of reality.

First off, the United States Federal Reserve, apparently a private corporation whose self-declared mandate is to be “the central bank of the United States, that provides the nation with a safe, flexible, and stable monetary and financial system”, has been “buying” Treasury bills, the source of U.S. monetary supply, at the rate of, on average, $75 Billion a month.

But that process has resulted in the Fed being exposed in no insignificant way to major losses from credit exposure. But Ben Bernanke, the Fed’s embattled leader, suggested last week that the risks were minimal, because “if the liabilities on the Fed’s balance sheet were to exceed its assets, it would only be so because of rising interest rates in the context of a thriving economy.”

Huh? What kind of pie-in-the-sky theoretical postulation is that?

According to a Reuters article earlier today:

“..the Fed’s newfangled policy steps and the potential for credit losses raises, for some experts, the prospect that the Treasury may actually be forced to ‘recapitalize’ the Fed — economist-speak for what others might call a bail-out.”

This is no oversimplification – this is reality.

The Fed is broke, and so is the Treasury. The ability of the Fed to ‘stimulate’ the economy in such a condition does not exist. If the only way to inject capital into the asset-stimulating portion of the economy is to encumber the current account of the same economy with an exponentially greater quantity of debt, the result can only be, at some point, default. Somebody needs to stand up and admit that these two lines, debt growth and economic recovery, are permanently divergent, and the economist-generated stipulation that they can one day cross in a self-fulfilling prophetic law of delusional economic prophecy is preposterous. That is one of the events that is pushing the U.S. towards financial annihalation. That will be the primary catalyist in triggering the 2011 financial crisis.

China is Smoking Opium
Even after the horrible catastrophe of the 2008 financial meltdown, exacerbated by opportunistic banks attacking each other in a global cartel-induced moment of weakness, China emerged as the economic juggernaut that was indestructible. Why, even for 2011, the International Monetary Fund pegs China’s growth at 10.5%.

But just as the U.S. puffs and puffs away at its crack pipe burning U.S. dollars, the drug of choice and path to ruin for the United States economy, so China deeply inhales at regular intervals its own pipe carved from jade and stuffed full of smouldering yuan. In fact, China is so confident in the unassailable virtue of its centralist and therefore free-of-political-interference monetary policy that it positions itself increasingly as global economic grandfather. It generously subscribes to the debt auctions of economically hobbled nations like Greece and Portugal, Ireland and Spain, while doling out paternal advice and admonishments to the U.S. and Europe.

But just how sound is China’s future?

No at all sound, if Mark Harte of Corriente Advisors in the United States is to be believed. He is the American hedge fund manager who made millions predicting the sub-prime crisis and the European sovereign debt crisis. His new fund is betting that China’s economic machine may be showing signs of seizing up, and he’s definitely not alone.

Corriente Advisors stated, “We expect the economic fallout from a slowdown of China’s unsustainable levels of credit and growth to be as extraordinary as China’s economic outperformance over the past decade.”

Whole cities are vacant in areas of China, built on credit that has yet to be repaid, and in the expectation that the massive migration of rural residents to gleaming new cities would continue. But house prices remain out-of-reach for most Chinese, averaging 22 times disposable income in Beijing alone.

According to one analyst, Chinese banks have lent US$1.7 trillion to local state entities that are not themselves commercially viable, and who have use inflated land and real estate values as collateral.

Sound familiar? These are the exact conditions that existed in the United States real estate market just before the bubble burst in 2008.

If China growth were to slow to just 5%, commodity prices for coal, copper, steel and cement would plummet by as much as 20%, according to one study.

Gold is now under fresh assault by the biggest banks who successfully lobbied for the defeat of position limits in both the gold and silver derivative markets. Now free to build up the huge short positions against gold and silver that have to date been the source of most of the negative pressure on those monetary metals’ prices since 2000, the prices of both have descended to new monthly lows.

Consider that a gift. With the sheer scale and scope of the next economic collapse threatening to dwarf that of 2008, holders of gold and silver will be in a much better position to whether the imminent tempest far better than holders of U.S. dollars or Chinese yuan.
Dollar Collapse dollar debasement shtf