You Have No Idea .. The Power Of The Dark Side 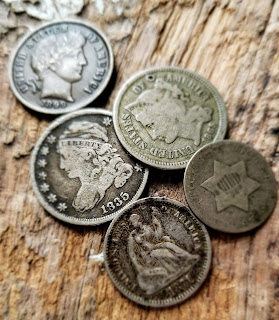 Our founding fathers knew it could become a problem, in fact they were very specific when they wrote the Coinage Act of 1792. I'm also sure that when President George Washington signed this act into law May 8th 1792, he could have never imagined the abomination that would eventually become the "fiat" United States monetary system and a devastated dollar. George would have been very dismayed with the base metal slugs we now call coins, except for the "nickel" which is still in it's original copper nickel composition, although I'm sure the U.S. Mint can not continue minting nickels at a loss much longer.
The fact of the matter is that our monetary system from the ground up, has been destroyed. At this point what we all need to do is start asking ourselves what we really believe?
#1- Do you think our monetary system is in trouble?
#2- Do you think our government is helping the situation or hurting it?
#3- Are you thinking it won't affect you?
#4- Who do you think runs the country?
#5- Do you think that those who control our money, control our government?
#6- Is your government trying to control your right to bear arms?
I'm sure that many of you are sure of one thing, its a mess.  I do think its high time for 'we the people" to start exercising some individual patriotic actions.
Our monetary system has been absurdly abused .. The Dark Side will keep pumping fiat dollars into the system any way possible. The feds are engaged in a sweeping series of unthinkable measures to keep you and I, under control in this so called society.

But you can help stop it with a few simple actions.

Exercise your right to bear arms and own firearms.
I shouldn't need to tell you why.

I'm not advocating selling the family farm to buy Gold & Silver, just a small percentage of fiat dollars turned into hard money will do more then cripple a few banksters, or should I say the Dark Side.

Bullion or Gold and Silver coin gives you the control , the way it was meant to be.
May the force be with you ..
coinage act gold investing US coinage