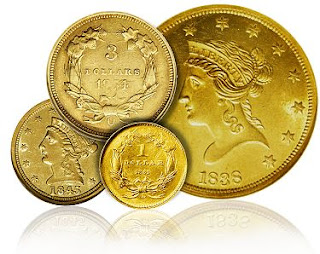 There are tons of reasons why I expect higher gold and silver prices in the near term. In fact, there so many of them that I will only be able to touch on a few so here it goes ..

Current gold and silver prices are much lower than they would be if the U.S. government had not suppressed those prices. If you adjust the January 1980 gold and silver market peak prices for inflation, you come out somewhere between $2,100 and $2,700. For silver, the price won’t reach a new inflation-adjusted record high until it reaches somewhere between $125 and $160.

The U.S. government and its trading partners and allies are running out of ammunition for future price suppressions. Above and beyond simply selling naked short contracts on the commodity exchanges, the volume of trading on the London Bullion Market Exchange, the world’s largest market for trading physical gold and silver indicates that large volumes of physical gold and silver have entered the market that have not been included in the supply statistics provided by widely followed analysts such as GFMS and CPM Group, and cited by organizations like the World Gold Council.

Much of this mysterious supply of gold could be provided by central banks leasing or selling their gold. While so-called mainstream analysts such as Jessica Cross may claim that central banks have only leased about 15 percent of their gold reserves, there are multiple analysts such as Adrian Douglas, James Turk and Frank Veneroso who contend that central banks have already disgorged at least 25 percent and perhaps as much as 50 percent of all physical gold in their reserves.

Among the circumstantial evidence supporting this contention is the mysterious appearance of gold bars in the London market that are not refined to exchange standards but do match the purity of the bars that were made by the U.S. Treasury during the compensated mandatory gold redemption of 1933.

The widely published statistics on gold and silver supply and demand are understated. The regular widely cited analyses track what they calculate to be physical supply and demand. To reconcile the difference between these two amounts, they simply assume it represents the net investment or liquidation by investors. It looks like gold supplies are actually about 15-20 percent higher than has been reported, which means that investment demand has actually been much higher as well. Now that central banks appear to have less gold to sneak into the market, the supplies will actually decline further than are being reported, while demand grows. As the imbalance between supply and demand grows, prices have to eventually rise.

There are long-term supply deficits of gold and silver that have absorbed a significant percentage of formerly available above-ground inventories. Since 1990, supplies of newly mined gold and silver, scrap recoveries and acknowledged government sales have been lower than identified demand almost every single year. One way to cover these shortages is by drawing down existing inventories.

At the time the U.S. government stopped redeeming Silver Certificates for silver in 1968, it had a hoard of about 2 billion ounces of silver. This inventory was been completely exhausted a few years ago. Analysts now figure, at the most optimistic, the practically available silver inventories are only enough to cover about one year of silver market shortages.

Industrial demand for gold and silver is rising. Silver’s price has been so low, relatively speaking, that it no longer deserves to be called a precious metal. Because of its relative low price and its desirable chemical properties for conducting electricity and killing bacteria in such a way that it is impossible for the bacteria strains to mutate and become immune, there has been more research into industrial applications for the uses of gold and silver in recent years.

The results have been phenomenal. Just to give you a small feel for how much potential use silver may achieve, it is possible to add a little bit of silver to paint, costing 1 to 2 cents per square foot of coverage, so that any germs that touch the wall are eradicated. And I don’t mean fairly effective. I mean that within hours over 99.9 percent of these bacteria are destroyed.

The U.S. government is on a course to reduce and possibly destroy the value of the U.S. dollar. The value of an ounce of gold or silver doesn’t change. What does change is the value of the currency by which it is measured. If the U.S. dollar falls in value, the price of gold and silver in that currency will invariably rise. You don’t have to trust me when I tell you that the U.S. dollar is destined to fall in value. You just have to look at the Federal Open Market Committee announcement on Nov. 3 where they state that they will inflate the U.S. money supply by $600 billion by the end of June 2011.

Usually governments try to be sneaky about inflating the money supply. For some reason, politicians now think that being brazen about increasing inflation will reassure the citizenry.

The London Bullion Market Exchange and the COMEX simply do not have enough physical gold and silver to meet their contract obligations. In theory, the London market was supposed to be settled with the delivery of physical metal upon contract maturity. On this basis, that meant that the vaults were supposed to contain enough gold and silver to redeem 100 percent of the outstanding contracts. However, in testimony at the Commodity Futures Trading Commission hearings on March 25, 2010, two people revealed that the London exchange only had enough gold and silver to cover 1-3 percent of the liability.

The COMEX has been a commodity market for traders that were not necessarily looking to take physical delivery of the underlying asset. Most traders have simply sold their long contracts, or rolled them over into contracts maturing further in the future. As you might suspect, the COMEX warehouses only have enough physical gold and silver to cover a small fraction of their open contracts.

Since mid-June 2010, there has been a run on COMEX inventories, where more contract owners are taking delivery upon maturity and those who are storing eligible inventories are withdrawing them from the exchange. We are seeing a similar pattern in the London market, where contract owners are taking delivery of the physical metal to move them to storage in Switzerland, the Middle East, Singapore, or Hong Kong.

CFTC Commissioner Bart Chilton alleges criminal manipulation of COMEX silver market; four law firms (so far) file lawsuits seeking damages from JPMorgan Chase and HSBC for their role in the manipulation. These are new developments in the past three weeks that have helped spark gold and silver to new highs. The law firms that have filed these suits have impressive track records at winning cases against the U.S. government and government-regulated private parties.

I could go on and on but I think you get the idea that new supplies are not able to keep up with growing demand and the already tiny inventories are disappearing fast. Putting these factors together, along with the falling value of the U.S. dollar, and you have prime reasons why gold and silver prices are likely to be much higher in the short term. For gold, I anticipate that it will reach $1,500 by the end of January 2011 and surpass $2,000 by December of 2011. I think there is more than a 50 percent chance that silver will pass $30 by the end of this month. By the end of this December, I would not be surprised to see the price of silver top $50-$60 bucks an oz.
If you need to get a hold of us a Guns Gold just leave myself or Jules a message below with your email address or phone number and one of us will get right back to you.