Gold Or Silver - Which Is Better To Own? 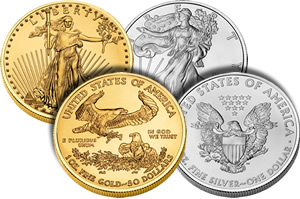 Silver has had quite a run the last couple months so it’s no surprise that it has gained much attention and interest from investors – even more so than gold.  It is extremely volatile, however, and tends to rise or fall in spurts so I’d like to focus on its attributes as compared to gold, make a case for holding some, and discuss some ultimate price possibilities.
Gold is known as the ultimate form of money; the king of money.  Silver is generally thought of as gold’s little brother or ‘Poor Man’s Gold’.  It is said that:
Gold is the money of Monarchs,
Silver is the money of Gentlemen,
Barter is the money of Peasants, and
Debt is the money of Slaves.
Both gold and silver have been used as money forever.  Historically, the price of gold has almost always been greater than that of silver.  This is because silver is ten to twenty times more plentiful in nature.
Should We Only Hold Gold?
I say no for the following reasons:
1. you get more (metal) for your money holding silver.
2. the price of silver has more room to appreciate, both because of its relative low price and because of the current relatively high gold:silver price ratio.
Should We Only Hold Silver?
I say no again – for the following reasons:
1. Gold is highly recognizable and highly coveted in all societies.  Most world governments and central banks hold gold but virtually no silver, save a few notable exceptions (Russia, China, and India).  They know that gold is the ultimate money.
2. Just as you would diversify your portfolio among asset classes and large/small cap stocks, etc., so too should you diversity between gold and silver.  No one knows which will appreciate faster or further and be the superior investment going forward.  Therefore, I hold both.
What Are Silver’s Major Attributes?
Silver has three huge attributes that make it special, valuable, and unique:
1. Versatility: silver has many and varied important uses where it is the best solution.  It is either the best material to use for a given application or it is the least expensive of all the alternatives.
2. Inelasticity: more silver is not produced as price increases because most silver comes from other-than-silver mines, and less is not consumed as the price increases because there are no less-expensive alternatives.
3. Duality: silver has the potential to do well price-wise in both an up and a down economy.  Being both an industrial metal as well as money in and of itself, silver tends to have a market no matter the condition of the economy.

How Do Gold and Silver Compare With Each Other?
Below are 22 things to ponder when comparing and contrasting gold and silver, in no particular order:
1. Gold is hoarded and the above-ground stockpile is continuously expanding.  Silver is consumed and is uneconomical to recycle in most uses.
2. There is greater than 300 times the dollar value of gold in above ground form as there is silver.  Silver is the smaller market by far.
3. According to the U.S. Geological Survey, there are fewer years of production of silver left in the ground than any other metal or mineral, including gold.
4. Silver is used in more applications than any other commodity (aside from petroleum).
5. About 30% of silver comes from primary silver mines.  Approximately 70% is byproduct of other primary metal mines.  Most gold is produced from primary gold mines.
6. There is less gold mined than silver, but there is more gold than silver bullion in existence.
7. Both gold and silver have been selling near or even below the cost of production for the last 15 years.
8. Both gold and silver are up over five fold since the beginning of this current bull market.
9. Silver is used in industry and for investment.  Gold is used almost entirely for investment.
10 Silver is more expensive or difficult to store (or hide) than gold because you get more for your money.
11. It would be easier for silver to rise higher on a percentage basis than gold due to the ‘law of large numbers’.
12. Only about 2% of the 160,000 tonnes of gold unearthed over the last 5,000 years has been lost and is unrecoverable according to Goldfields Mineral Service (GFMS) and the World Gold Council (WGC) while most of the silver ever mined is unrecoverable and gone for good.
13. Silver supply and demand are both ‘inelastic’.  This means that supply cannot be ramped up quickly when its price rises.
14. The National Inflation Association (NIA) picked silver as its investment of the decade in December 2009.
15. The Silver:Gold Price Ratio favors silver appreciation to return to historic norms.
16. Both gold and silver tend to rise and fall in price together but not necessarily in percentage terms.  Their price movements are still highly correlated though.
17. In precious metal bull markets, silver always outperforms gold before it is over. Silver has a tendency to underperform gold as a rally in the metals gets going, however, it tends to greatly outperform gold near the market tops.  At its peak, for example, gold was up nearly 250% in early 2008 but silver was up well over 300% at the same time from the beginning of 2002.  As the metals both declined throughout the remainder of 2008, silver fell farther than gold from peak to trough.  Silver fell nearly 60% while gold fell about half as much or 30%.  Now on the way back up silver is again leading.
18. Gold and silver related stocks tend to greatly outperform on the way up but terribly underperform on the way down.  On the way up, many stocks leveraged the metals 3, or 4, or 5:1 but on the way down some gold and silver stocks lost 90% or more of their pre-crash market value.
19. When the economy is good, silver will tend to outperform and when the economy is bad, gold will tend to outperform.  This occurs because silver is also an industrial metal besides being a monetary metal and, [as such,] is in great demand when the economy is rolling along but less in demand when the economy is in recession.  Conversely, gold tends to be forgotten when times are good and remembered when times are bad.  Even though gold fell substantially during the financial meltdown of 2008, it fell less than did the stock indexes, silver, or oil.
20. I believe silver may outperform gold dramatically before the bull has run its course.  Silver rose more than 38 fold in the 70’s bull market; from a fixed price of $1.29 to $50 ($52.50 CBOT).  Silver bottomed just above $4 in 2001.  38 x 4 = $152.  Not a bad initial target.
21. Interestingly, the Silver/Gold ratio bottomed at ~ 16:1 in 1980.  In other words, you could exchange one ounce of gold for 16 ounces of silver near the end of that bull market.  Today, the ratio is about three and a half times higher (~56:1).  Should gold get to $6375 and the ratio return to 16:1 at the top, silver will reach almost $400 an ounce.  That’s a 100 fold increase from its pre-bull low.  Remember, we’re only playing with numbers here, the markets will surprise and do their own thing in due course.
22. The following two extremely important and potentially explosive events for silver have happened just recently:
a) CFTC commissioner Bart Chilton, in regards to the trading of silver on the Commodities Exchanges, said; “There have been fraudulent efforts to persuade and deviously control that price”, and “I believe there have been repeated attempts to influence prices in the silver markets”, and  “the public deserves some answers to their concerns that silver markets are being, and have been, manipulated.”
b) Two separate lawsuits against JPMorganChase and HSBC for manipulating and suppressing the price of silver futures on the Comex in violation of the Commodity Exchange Act and the Sherman Anti-Trust were filed as class action suits. Any hint that these suits have merit and may be settled in favor of the complainants or a finding of price suppression by the CFTC in its current silver market investigation, could send the silver price sharply higher.
Which is better to own – gold or silver?
I own some of both but I believe that silver will outperform gold in the end.