Economic Suicide
As our socialist progressive leaders in the developed world murder wealth
creation, the middle class and our economies under the guise of saving them.
Capitalism is now dead in the lands of its birth because there are NO REWARDS for
saving, investing, starting a business, hiring an employee, taking a risk or working
your ass off to get ahead.
The rewards for doing so now go to GOVERNMENT, public serpents and their
supporters to redistribute to themselves and to the desperate, useful idiots who
support them (because they do not have the education required to know not to). As
the something-for-nothings in society turn to government to save them, more torture
lays ahead.
Public policy responses to the unfolding depression are exactly the
OPPOSITE of what is required to restore economic and income growth.
Obama’s policies are not new; they are an AGGRESSIVE expansion of those under
George Bush. More government, more entitlements, more regulation, more deficit
spending -- compassionate conservatism was nothing less than progressive socialism
in disguise.
The middle class is being destroyed as socialist progressives, elites and crony
capitalists destroy the means for rising standards of living/incomes, rewarding savers
and investors and short circuit capitalism – ever driving the middle class into
dependence through monetary debasement, unsound money and economic
sabotage, purposefully. 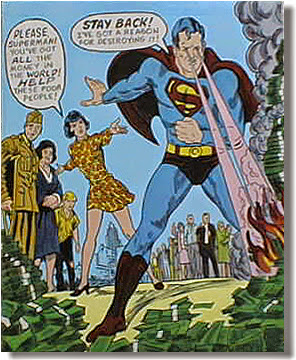 Marxist socialism is the economic policy of “misery spread widely”, collapsing
economies and destroying the middle class, and it is now practiced throughout the
developed world. In the developed world, capitalism is dying as socialist predators
are allowed to prey upon their young entrepreneurs and small businesses to protect
the big crony capitalists who support them. It robs the middle class of the
opportunities to thrive and rise through being superior competitors who dethrone the
corporatists by providing more for less to consumers and being rewarded for it.
You can Strike back .. All the paper dollars in circulation are doing one thing , they are becoming less valuable with every passing day!
You can chose to propagate the fiat system .. Or help return it to what it once was!
Your founding fathers designed the monetary system for a  Reason.
It has been gradually and systematically reduced to what it is today.
Your politicians are asking for change .. Why don't you give it to them .. in Silver and Gold.