Unavoidable Side Effects Of U.S. Economy 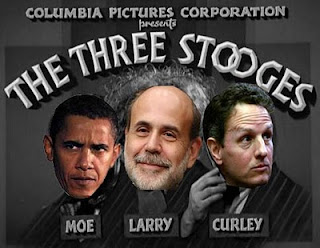 Most Americans are still operating under the delusion that this "recession" will end and that the "good times" will return soon, but a growing minority of Americans are starting to realize that things are fundamentally changing and that they better start preparing for what is ahead. These "preppers" come from all over the political spectrum and from every age group. More than at any other time in modern history, the American people lack faith in the U.S. economic system. Well, not everyone can move to Alaska and start working that gold claim or run off to the Florida and start metal detecting full time but hopefully this article will give people some practical steps that they can take to insulate themselves (at least to an extent) from the coming economic collapse.

Before I get into what people need to do, let's take a minute to understand just how bad things are getting out there. The economic numbers in the headlines go up and down and it can all be very confusing to most Americans.

However, there are two long-term trends that are very clear and that anyone can understand....

#1) The United States is getting poorer and is bleeding jobs every single month.

#2) The United States is getting into more debt every single month.

Every single month, Americans buy far, far more from the rest of the world than they buy from us. Every single month tens of billions of dollars more goes out of the country than comes into it.

That means that every single month the United States is getting poorer.

Each year, hundreds of billions of dollars leave the United States and don't return. The transfer of wealth that this represents is astounding.

But not only are we bleeding wealth, we are also bleeding jobs every single month.

The millions of jobs that the U.S. economy is losing to China, India and dozens of third world nations are not going to come back. Middle class Americans have been placed in direct competition for jobs with workers on the other side of the world who are more than happy to work for little more than slave labor wages. Until this changes the U.S. economy is going to continue to hemorrhage jobs.

The U.S. government has helped to mask much of this economic bleeding by unprecedented amounts of government spending and debt, but now the U.S. national debt exceeds 13 trillion dollars and is getting worse every single month. Not only that, but state and local governments all over America are getting into ridiculous amounts of debt.

Needless to say, this cannot last indefinitely. Eventually the whole thing is just going to collapse like a house of cards.

So what can we each individually do to somewhat insulate ourselves from the economic problems that are coming?....

The old saying, "the borrower is the servant of the lender", is so incredibly true. The key to insulating yourself from an economic meltdown is to become as independent as possible, and as long as you are in debt, you simply are not independent. You don't want a horde of creditors chasing after you when things really start to get bad out there.

In 2010, there simply is not such a thing as job security. If you are dependent on a job ("just over broke") for 100% of your income, you are in a very bad position. There are thousands of different ways to make extra money. What you don't want to do is to have all of your eggs in one basket. One day when the economy melts down and you are out of a job are you going to be destitute or are you going to be okay?

Many Americans have left the rat race and have found ways to live on half or even on a quarter of what they were making previously. It is possible - if you are willing to reduce your expenses. In the future times are going to be tougher, so learn to start living with less today.

Today the vast majority of Americans are completely dependent on being able to run down to the supermarket or to the local Wal-Mart to buy food. But what happens when the U.S. dollar declines dramatically in value and it costs ten bucks to buy a loaf of bread? If you learn to grow your own food (even if is just a small garden) you will be insulating yourself against rising food prices.

5 - Make Sure You Have A Reliable Water Supply:

Water shortages are popping up all over the globe. Water is quickly becoming one of the "hottest" commodities out there. Even in the United States, water shortages have been making headline news recently. As we move into the future, it will be imperative for you and your family to have a reliable source of water. Some Americans have learned to collect rainwater and many others are using advanced technology such as atmospheric water generators to provide water for their families. But whatever you do, make sure that you are not caught without a decent source of water in the years ahead.

This is a tough one, because prices are still quite high. However, home prices are going to be declining over the coming months, and eventually there are going to be some really great deals out there. The truth is that you don't want to wait too long either, because once Helicopter Ben Bernanke's inflationary policies totally tank the value of the U.S. dollar, the price of everything (including land) is going to go sky high. If you are able to buy land when prices are low, that is going to insulate you a great deal from the rising housing costs that will occur when the U.S dollar does totally go into the tank.

An increasing number of Americans are going "off the grid". Essentially what that means is that they are attempting to operate independently of the utility companies. In particular, going "off the grid" will enable you to insulate yourself from the rapidly rising energy prices that we are going to see in the future. If you are able to produce energy for your own home, you won't be freaking out like your neighbors are when electricity prices triple someday.

Non-perishable supplies are one investment that is sure to go up in value. Not that you would resell them. You store up non-perishable supplies because you are going to need them someday. So why not stock up on the things that you are going to need now before they double or triple in price in the future? Your money is not ever going to stretch any farther than it does right now.

Americans have become very insular creatures. We act like we don't need anyone or anything. But the truth is that as the economy melts down we are going to need each other. It is those that are developing strong relationships with family and friends right now that will be able to depend on them when times get hard.

10 - Get Educated And Stay Flexible:

When times are stable, it is not that important to be informed because things pretty much stay the same. However, when things are rapidly changing it is imperative to get educated and to stay informed so that you will know what to do. The times ahead are going to require us all to be very flexible, and it is those who are willing to adapt that will do the best when things get tough.
Dollar Collapse Financial Armageddon shtf