The Patriotic and Moral Imperative for Owning Gold and Silver

Johnny Silver Bear
(Editors Note: One of the perks of editing "the Bear" allows me to post my own rants. I originally published The Nature of Money in October, 2004.) 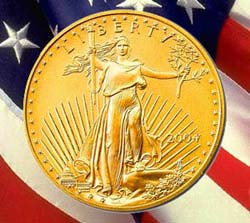 I pledge allegiance to the flag...
Remember when you learned those words? It was back when everything was simple. The Pledge of Allegiance was written in 1892 by Francis Bellamy, the circulation manager of the Boston based "The Youth's Companion" magazine. The end of the Nineteenth Century was a much simpler time. The world was a much simpler place. It not so simple anymore.
When we recite those seemingly patriotic words, what are we really pledging our allegiance to? To the flag? To the United States? To the Republic for which it stands?
If we are to pledge our allegiance, let it be to an ideal. That ideal should be the American way of life as prescribed by the Constitution. The Constitution was designed to provide the essential ingredient in the recipe for the American Dream. It provided the "roadmap" that gave our forefathers the opportunity to make this country great. That greatness was born out of the sweat and blood of a liberated citizenry.
...of the United States of America.
Freedom as a concept and an ideal is under attack in America. Liberty has lost its meaning for many Americans. It often appears far less valuable than it really is. All too often, the unthinking trade liberty for the seductive illusion of security and stability. Just as Benjamin Franklin warned us, in the end they are left with neither.
We have reached a point where, once again, we must rely on the guidance of our forefathers and their patriotic initiative.
Upon reflection, it would seem that the "patriotism" exemplified by the founders of the American Republic consists, in part, of an allegiance, not to persons, not to offices, and not even to institutions, but rather to political and moral ideals. Such ideals as self-determination, the social contract, inalienable human rights, and additional ideals such as those enumerated in the Declaration of Independence and the Bill of Rights.
An attempt at the decimation of the ideals of freedom and liberty is currently being explored by an "Evil Corporation" that now plans to rule the world.
And to the Republic for which it stands,
Twenty-six-hundred years ago, in Athens, two candidates ran for office. Each candidate spent some of his own money buying votes. In every Democratic election in history, there have been candidates who used their own money to buy votes. Buying votes has always been an intrinsic part of every Democratic System. It is one of the reasons why Democracies are fundamentally flawed.
Everything evolves. Everything changes. For better or worse, nothing remains the same.
During Franklin D. Roosevelt's terms in office, things changed substantially. F.D.R. figured out a way to, in his mind, improve the system. Instead of using his own money to buy votes, he would use the taxpayer's money. This would change the face of American politics forever. By inventing more and more social welfare programs, he effectively bought more and more votes with the taxpayer's money. You can always find a bunch of folks willing to vote for a handout. He, more than any other person in our Nation's history, instigated a collectivist paradigm that would mislead our country, and place us in the precarious position that we find ourselves today.
Our present day politicians have embraced the collectivist ploy of social welfare, used it over and over again to get themselves elected and re-elected, adopted it as "business as usual", and gone about their ignoble pursuits with a "job security is job one" mentality.

"Government is the great fiction, through which everybody endeavors to live at the expense of everybody else." -- Frederick Bastiat

"The only difference between Communists and Fabians is a question of tactics. They may compete over which of them will dominant the coming New World Order, over who will hold the highest positions in the pyramid of collectivist power; they may even send opposing armies into battle to establish territorial pre-eminence over portions of the globe, but they never quarrel over goals. Through it all, they are blood brothers under the skin, and they will always unite against their common enemy, which is any opposition to collectivism." --Taken from G. Edward Griffin's essay The Grand Deception, a second look at the war on terrorism.

"Throughout history, it has been the inaction of those who could have acted; the indifference of those who should have known better; the silence of the voice of justice when it mattered most; that has made it possible for evil to triumph." -- Haile Selassie

When was the last time that you acted in a manner that would help insure your personal liberties and freedoms? When have you acted in a manner that did not simply depend on the Government to protect and take care of you. The solution will come as a result of our individual actions. There are no groups on our side. The larger the group, the larger the problem.
I will be forever imploring you to own up to your individual patriotic responsibilities. One easy way is for you to do this is to purchase physical gold and silver bullion. In reality, compared to the amount of fiat currency in circulation, there is so little bullion available for purchase, that a concerted effort on your part could send the value of gold, and just as importantly silver, to the moon.
By participating in this simple, passive action, we can be part of the solution and avail ourselves a chance to survive the mind-boggling catastrophe that lies ahead. We are faced with an epic struggle against the tyranny of false money. Gold and silver are assets that are not borne out of someone else’s debt or liability. Debt based money is abusable and will, therefore, always be abused. Like the children in a dysfunctional family, we have been severely abused. Denial is not a river in Africa.

History records that the money changers have used every form of abuse, intrigue, deceit, and violent means possible to maintain their control over governments by controlling money and it's issuance. -- James Madison

Besides enriching ourselves through the exercise of buying and owning gold and silver, we can passively bring about some very important changes in one way that will really make a difference. As the price of bullion subsequently rises, more and more people will begin to see Federal Reserve Notes for what they really are; fake money, and recognize and appreciate precious metals for what the really are; real money.
If one half of one percent of Americans each went out and bought ten ounces of silver, that would amount to 14,000,000 ounces of silver. COMEX has much less than 100,000,000 ounces of silver available. That much buying pressure would have an explosive effect on the price. This could force the hand of the cartel and help change the world for the better.
Get the word out. A candle loses nothing by lighting another candle. Consider it your patriotic and moral imperative.
Buy gold and silver.

It's not what you don't know that will screw you up, it's what you know that is wrong. The spin you hear from the mainstream media is intended to mislead you. Open your eyes and face the future. If you leave your head in the sand and ignore it, you are only leaving your butt exposed for the world to kick. This all may sound like gloom and doom, but when you get a handle on what is going to happen, you will have a future filled with opportunity. Fortune favors the Informed.